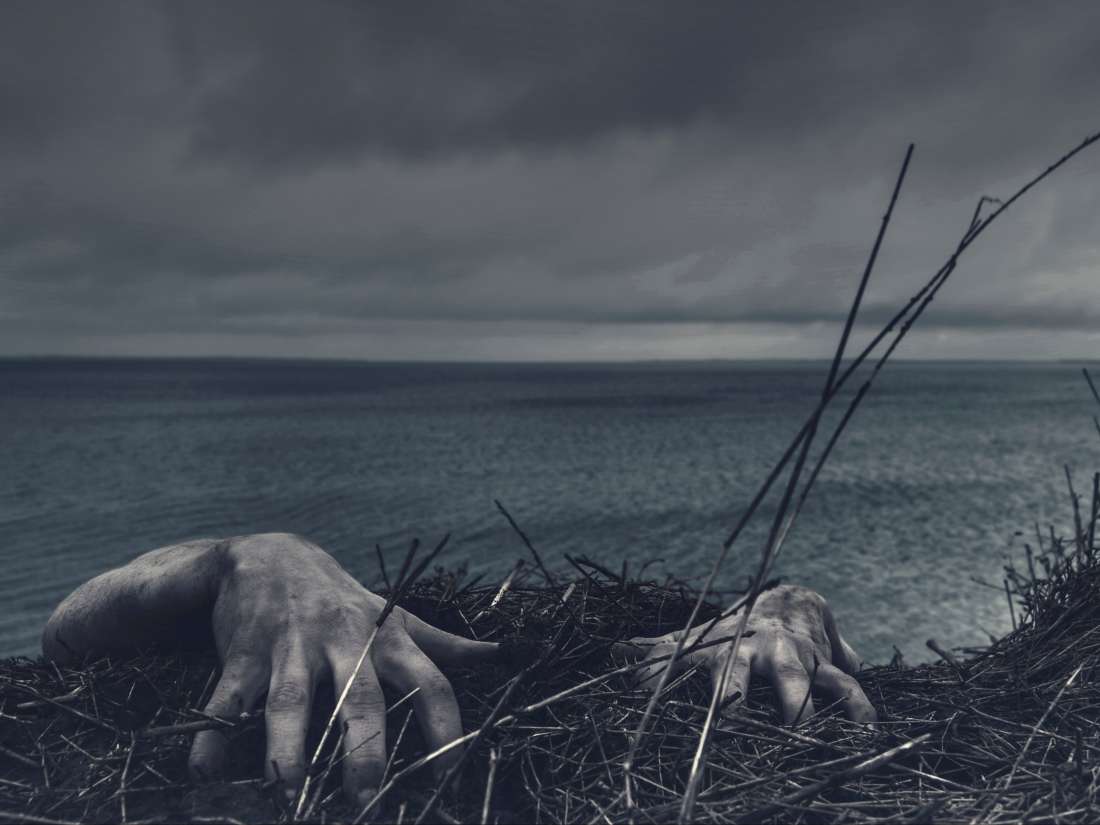 Zombies have become staple figures of popular culture, and the zombie apocalypse is a trope that features in many books, movies, and TV series. But are there actual, real cases of zombiism in nature? Read this special feature to find out.

Whatever you choose to call them, these corpses that rise from the grave to walk the world and terrify — and sometimes infect — its inhabitants are one of the top monsters in popular culture.

The word zombie — originally spelled as zombi — first came into the English language in the 1800s, when poet Robert Southey mentioned it in his History of Brazil.

According to the Merriam-Webster dictionary, the word comes from the Louisiana Creole or Haitian Creole word zonbi, and it is akin to the Kimbundu term nzúmbe, which means ghost.

The word refers to creatures from Haitian folklore that, at its origin, was little more than the ghosts from Western folklore.

However, little by little, the concept evolved to refer to a person that is rendered mindless by a witch doctor, entering a death-like state while still animated, and thus becoming the witch doctor’s slave.

Nowadays, people use the word “zombie” a lot more loosely — often metaphorically — to refer to anyone or anything that presents as apathetic, moves slowly, and demonstrates little awareness of their surroundings.

But do zombies or zombie-like beings actually exist in nature? If so, what are they, and how do they come to enter this state of “undeath?” And can humans ever become zombie-like? In this special feature, we investigate.

Ophiocordyceps is a genus of fungi that has more than 200 species, and mycologists are still counting. Many species of fungi can be dangerous, often because they are toxic to animals, but there is one thing in particular that makes Ophiocordyceps especially frightening.

These species of fungus “target” and infect various insects through their spores. After infection takes place, the parasitic fungus takes control of the insect’s mind, altering its behavior to make the propagation of fungal spores more likely.

Ophiocordyceps “feed” on the insects they attach to, growing into and out of their bodies until the insects die.

When Ophiocordyceps unilateralis infect carpenter ants, they turn them into zombies. The ants become compelled to climb to the top of elevated vegetation, where they remain affixed and die. The high elevation allows the fungus to grow and later spread its spores widely.

Researchers from Pennsylvania State (Penn State) University found that O. unilateralis take full control of the ants’ muscle fibers, forcing them to move as it “wants” them to.

“We found that a high percentage of the cells in a host were fungal cells,” notes David Hughes, who is associate professor of entomology and biology at Penn State.

“In essence, these manipulated animals were a fungus in ants’ clothing.”

Below, you can watch a video showing how the parasitic fungus infects its victims, leading them to their death.

Last year, zoologist Philippe Fernandez-Fournier — from the University of British Columbia in Vancouver, Canada — and colleagues made a chilling discovery in the Ecuadorian Amazon.

They found that a previously unknown species of the Zatypota wasp can manipulate spiders from the Anelosimus eximius species to an extent that researchers have never before witnessed in nature.

A. eximius spiders are social animals that prefer to remain in groups, never straying too far from their colonies.

But Fernandez-Fournier and team noticed that members of this species infected with Zatypota larva exhibited bizarre behavior, leaving their colony to weave tightly-spun, cocoon-like webs in remote locations.

When the researchers opened these artificial “cocoons,” they found Zatypota larvae growing inside.

Further research presented a gruesome string of events. The Zatypota wasps lay eggs on the abdomen of A. eximius spiders. When the egg hatches and the wasp larva emerges, it starts feeding on the spider and begins to take control of its body.

When the larva has gained full control of its host, it turns it into a zombie-like creature that is compelled to stray away from its mates and spin the cocoon-like nest that will allow the larva to grow into the adult wasp.

Before entering its new “cocoon,” though, the wasp larva first finishes its “job” by devouring its host.

“Wasps manipulating the behavior of spiders has been observed before, but not at a level as complex as this,” says Fernandez-Fournier.

“[T]his behavior modification is so hardcore. The wasp completely hijacks the spider’s behavior and brain and makes it do something it would never do, like leave its nest and spinning a completely different structure. That’s very dangerous for these tiny spiders.”

Reanimating humans, or, at least, human-like creatures, as in Mary Shelley’s Frankenstein or H. P. Lovecraft’s Herbert West: Reanimator, is a notion that has piqued the interest of writers, filmmakers and, of course, scientists, throughout the ages.

But while bringing dead humans back to life may not be on the cards for our race just yet, reviving other organisms is. This can be particularly unsettling when we think that those organisms are viruses.

In 2014, researchers from the Centre National de la Recherche Scientifique at Aix–Marseille Université in France dug a fascinating organism out of the Siberian permafrost: a so-called giant virus, about 30,000 years old, which they named Pithovirus sibericum.

Giant viruses are called this way because, though still tiny, they are easily visible under the microscope. But there is something else that makes P. sibericum stand apart. It is a DNA virus that contains a large number of genes — as many as 500, to be precise.

This is in stark contrast with other DNA viruses, such as the human immunodeficiency virus (HIV), which only contains about 12 genes in all.

The size of giant viruses, as well as the fact that they contain such a large amount of DNA, can make them particularly dangerous, explain the researchers who discovered P. sibericum since they can stick around for an extremely long time.

“Among known viruses, the giant viruses tend to be very tough, almost impossible to break open,” explain two of the virus’s discoverers, Jean-Michel Claverie and Chantal Abergel, in an interview for National Geographic.

“Special environments such as deep ocean sediments and permafrost are very good preservers of microbes [and viruses] because they are cold, anoxic [oxygen-free], and […] dark,” they add.

When “reanimated, P. sibericum only infected amoebas — archaic unicellular organisms — but happily not humans or other animals. Yet Claverie and Abergel warn that there may be similar giant viruses buried inside the permafrost that could prove dangerous to humans.

Though they have remained safely contained so far, global heating and human action could cause them to resurface and come back to life, which might bring about unknown threats to health.

“Mining and drilling mean […] digging through these ancient layers for the first time in millions of years. If ‘viable’ [viruses] are still there, this is a good recipe for disaster.”

Also, in 2014, researchers from the John Innes Centre in Norwich, United Kingdom, found that certain bacteria, known as “phytoplasma,” turn some plants into “zombies.”

The bacteria — which insects disseminate — infect plants such as goldenrods, which have yellow flowers. The infection causes the goldenrods to put out leaf-like extensions instead of their usual blooms.

These leaf-like growths attract more insects, which allows the bacteria to “travel” widely and infect other plants.

While the transformation does not cause the plant to die, researchers are fascinated by how phytoplasma can bend this host’s “will” to make it grow the elements they require to spread and thrive.

“The insects transmit bacteria, so-called phytoplasmas, which destroy the life cycle of the plants,” says Prof. Günter Theißen from Friedrich Schiller University Jena in Germany, one of the researchers who have closely studied the activity of phytoplasma.

“These plants become the living dead. Eventually, they only serve the spread of the bacteria.”

But can humans turn into zombies, too? In the 1990s, Dr. Chavannes Douyon and Prof. Roland Littlewood decided to investigate whether Haitian zombies — reanimated, but mindless humans — were a real possibility.

In 1997, the two published a study paper in in which they analyzed the cases of three individuals from Haiti whose communities had identified as zombies.

One was a 30-year-old woman who had, allegedly, quickly died after having fallen ill. Her family recognized her walking about as a “zombie” 3 years after this event. Another was a young man who had “died” at 18, and reemerged after another 18 years at a cockfight.

The final case study concerned another woman who had “died” at 18 but was spotted again as a zombie 13 years after this event.

Dr. Douyon and Prof. Littlewood examined the three “zombies” and found that they had not been the victims of an evil spell. Instead, medical reasons could explain their zombification.

The first “zombie” had catatonic schizophrenia, a rare condition that makes the person act as though they are walking in a stupor. The second person had experienced brain damage, and also had epilepsy, while the third appeared merely to have a learning disability.

“People with a chronic schizophrenic illness, brain damage, or learning disability are not uncommonly met with wandering in Haiti, and they would be particularly likely to be identified as lacking volition and memory which are characteristics of a zombi,” the researchers write in their paper.

But there is also a specific psychiatric disorder called Cotard’s syndrome that can cause people to act like zombies. This is because they are under the delusion that they are dead or decomposing.

It remains unclear just how prevalent this condition is, but research suggests that it is a rare occurrence. Documented cases of people with Cotard’s syndrome are unsettling, nevertheless.

reports the situation of a 53-year-old woman who “was complaining that she was dead, smelled like rotting flesh, and wanted to be taken to a morgue so that she could be with dead people.”

study documents a 65-year-old man who had developed a belief that his organs — including his brain — had stopped working. He also believed that the house he lived in was slowly but steadily falling apart.

At some point, the man attempted to take his own life. Researchers report that “[h]is suicide note revealed that he wanted to kill himself as he feared spreading a deadly infection to the villagers who resultantly might suffer from cancer.”

Do such cases mean that zombies are real in some way, or do they merely reflect our uneasy relationship with death? We leave it to you to decide.