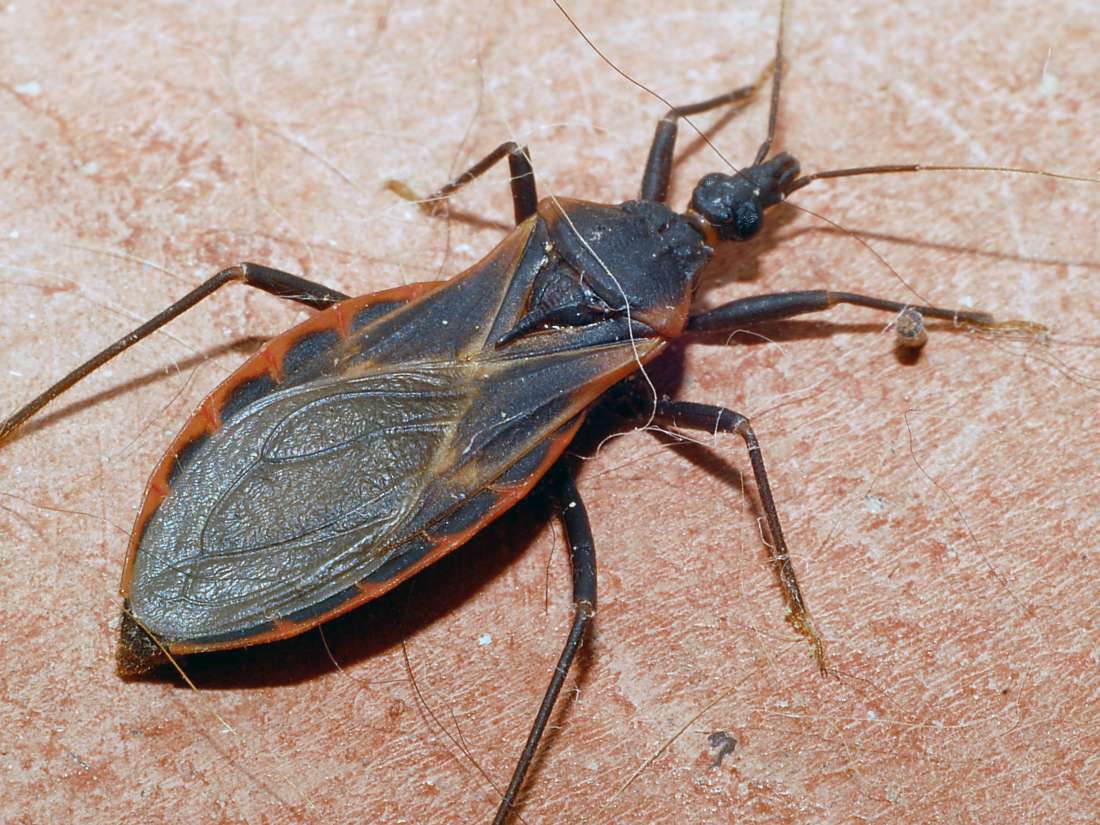 “Kissing bug” is the common name for a species of bug called triatomines. The bugs get their common name because they tend to leave bite marks on the face.

The main risk associated with kissing bugs is the presence of a parasite in their feces, which can cause Chagas disease in the people it infects. Although infections from this parasite are not common, complications can be serious and require early treatment.

Anyone who experiences a lot of kissing bug bites on their face or who thinks they may have Chagas disease should talk to their doctor.

Read on to learn more about the kissing bug, symptoms of a bite, the associated risks, and some treatment options.

Kissing bugs, or triatomines, feed off of the blood of humans and other animals. Kissing bugs are nocturnal, meaning that they hide during the day and are most active at night.

Kissing bugs will often bite and feed on a person’s blood while they sleep. Their saliva contains a compound that numbs the area they bite, so the person is often unaware of the bite at all.

These bugs get their name from the fact that they are attracted to the carbon dioxide that humans exhale. This is why they seem to bite people on the face, near the mouth and around the eyes. A person may experience numerous bites clustered together in these areas.

Kissing bugs generally live in areas with plenty of food sources, such as wooded areas and trees that house rodents and birds for them to feed on. Kissing bugs can enter the house from virtually any opening, though they commonly come through a tear in a screen door or an open window.

They are a major issue in South and Central America, as well as in Mexico. In fact, the Centers for Disease Control and Prevention (CDC) estimate that around have Chagas disease in these areas. There are also an increasing number of cases in the southern United States.

Kissing bugs may be hard to identify, as they appear similar to many other bugs in the U.S. Some key characteristics include: 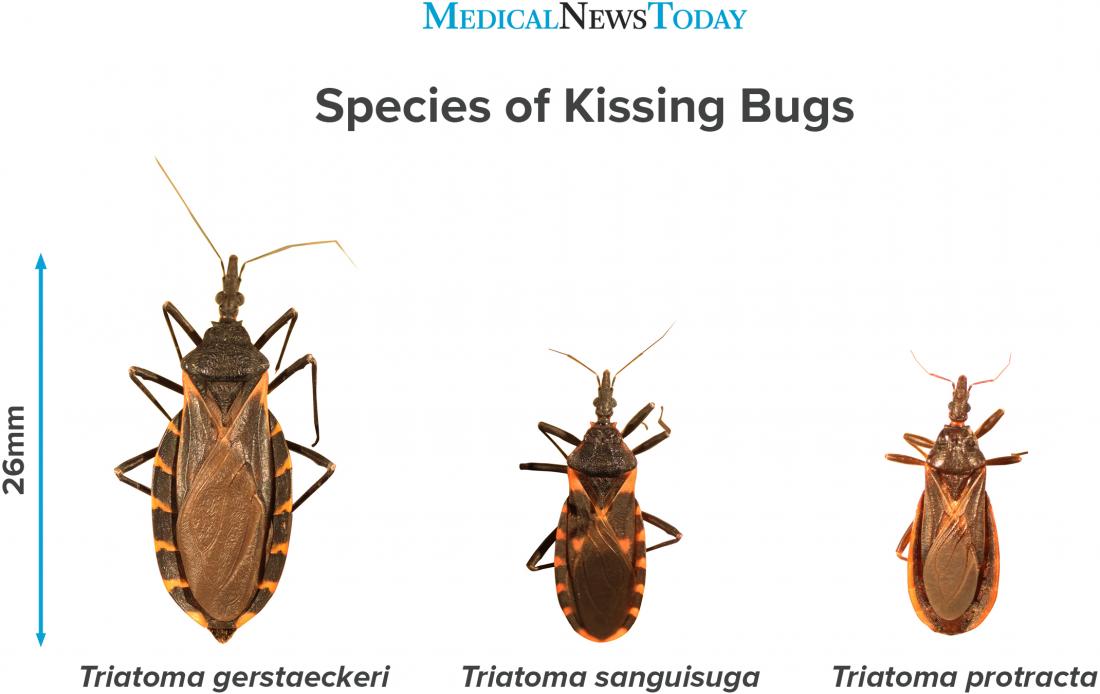 Kissing bug bites tend to look similar to those of other biting bugs. Sometimes, a person may not even notice that they have sustained a bite. Others may notice clusters of small bites around the mouth and eye areas.

The main risk of sustaining a bite from the kissing bug is contracting Chagas disease. Chagas disease is the common name for an infection from the Trypanosoma cruzi parasite.

Not all triatomines have the Trypanosoma cruzi parasite, but it is very common. In fact, the American Heart Association (AHA) note that in some areas, up to 60% of the bugs harbor the parasite.

Still, it is important to note that the overall risk of infection from the parasite is low. The only way for the infection to occur is if the parasite from the feces gets into an open wound or mucous membrane. This may happen if a person accidentally rubs the eye or mouth with a contaminated hand.

Triatomines that have the Trypanosoma cruzi parasite may not pass it on every time, and simply getting bitten does not mean that a person will develop Chagas disease.

Chagas disease has two stages. In the acute phase, which occurs in the first few weeks after infection, a person may experience no symptoms. If they do experience symptoms, they are likely to be mild and similar to those of a flu.

Symptoms to look out for include:

These symptoms are a reaction to the parasite circulating in the body.

Some children may also experience symptoms called Romaña’s sign during the acute phase. This is a swelling of the eyelid due to infection in or near the eye.

Once this phase is over, the infection will enter the chronic phase. During the chronic phase, the symptoms will improve on their own, as the number of parasites will naturally lower without treatment.

However, the infection is still present in the body. It poses a greater risk in the chronic stage, as there is no cure.

Even in chronic cases, people may never have other symptoms. However, the CDC note that of people may experience severe cardiac and gastrointestinal signs and symptoms years later, including:

These complications can be serious or fatal, so it is vital to see a doctor if a person suspects Chagas disease.

Successfully treating Chagas disease during the acute phase is the only way to prevent the chronic phase and the potential for these issues.

Neither of these are widely available in the U.S., but it is possible for doctors to obtain them for their patients.

There is no treatment for chronic Chagas disease, so early treatment is key.

Bug sprays are a common repellent for kissing bugs. The note that synthetic pyrethoid bug sprays have successfully gotten rid of house infestations in Latin America, though none have received specific approval for use in the U.S.

Anyone who has a house infestation of kissing bugs should consult a professional pest control operator before using any chemicals or insecticides to treat an infestation.

To prevent infestation, it is important to take steps to reduce the possible entryways these bugs have. This includes:

Avoid squashing any bugs, as this may expose the area to any parasites the bug has. Instead, place them in a container and fill it with rubbing alcohol or freeze it.

Clean any surfaces the bug comes into contact with using rubbing alcohol or a bleach solution.

Though a serious infection will not happen in every case, it is always essential to take precautions and see a doctor.

Anyone living in the southern regions of the U.S., Mexico, or Central America who notices clustered bug bites that look similar to kissing bug bites should see a doctor.

Anyone who suspects that they have Chagas disease should also see a doctor. Experiencing flu-like symptoms in the weeks after sustaining a bite from a kissing bug are signs to see a doctor for a full diagnosis and possible treatment.

Finally, anyone who has kissing bugs in their home or immediate area should take steps to eliminate them and may want to see a doctor to be safe.

Kissing bugs can be a major source of irritation. They leave bites on the face and other areas of skin, and an infestation in the house may mean that the people living there get bitten regularly.

Kissing bugs with the Trypanosoma cruzi parasite can also lead to Chagas disease. However, not every bug has this parasite, and not everyone who gets bitten will contract Chagas disease.

The overall likelihood of getting Chagas disease from a triatomine bug in the U.S. is low, though it is possible.

Anyone experiencing a severe reaction to a kissing bug bite, many bites, or flu-like symptoms after a bite should see a doctor for a full diagnosis and treatment.